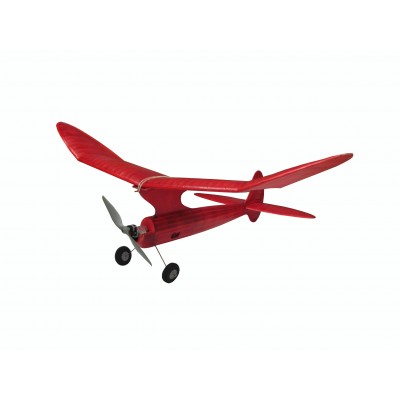 Carl Goldberg's Zipper has been said to be the world's best known free flight model. An unforgettable aircraft that revolutionized the world of free flight in the 1930's with its performance and features. Most notable was the pylon mounted wing producing a natural corkscrew climb. Introduced in the June 1939 Model Airplane News as a Comet Model Airplane Company kit, It was reported that over 700 Zippers were entered in the 1939 Nationals.  The original Zipper with a 54" span and 488 sq.in. area,  with a Dennymite .57 ignition engine,weighed between 26-36 producing a wing loading of 7½ to 10 ½ oz/sq ft depending on the battery and coil used; right in line with the SAM Texaco 8 oz/sq ft rule. The BMJR Zipper with a 44" span and 333 sq. in. area with a flying weight of 18.5 oz for 8oz/sf wing loading for either 1/2A or electric Texaco. Recomended power is the Cox Texaco .049 or the geared Speed 400 (S-400). Withe the electric power and speed control we have found this to be our favorite sport flyer.