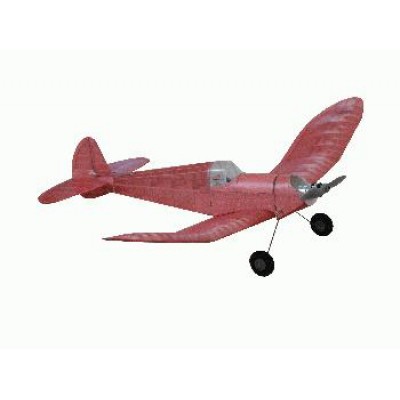 The original Panther was designed in 1939 by Walter Schutz as a free flight with a 46" wingspan and an ignition engine. The Panther was unique for it's time with a low wing rather than the more traditional high wing cabin type model. In 1939 it was kitted by the Peerless Model airplane company and became known as the Peerless Panther. The BMJR Panther is true to the original plan with the only changes to accommodate laser cutting technology and RC for SAM 1/2A and Electric Texaco competition. With a speed control it can be flown in Texaco limited motor run event, or as a relaxed sport model. The BMJR Texaco Panther has a wing span of 46"with area of 299 sq. in. Our finished flying weight is 19.8oz. ready to fly giving it a wing loading of 9.3 oz per ft. Recomended power is the Geared Speed 400 electric motor with MX-9215 Speed Control combo package (C-400). This geard/brushed option has plenty of power for sport or competition, and provided some needed nose weight.