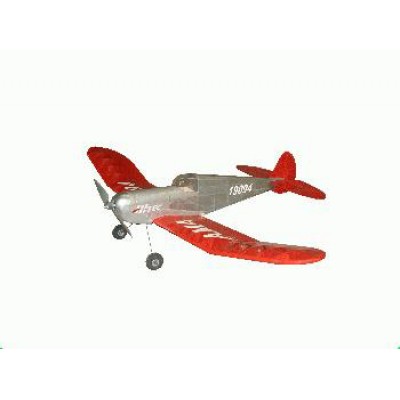 The original Panther was designed in 1938 by Walter Schutz as a free flight with a 46" wingspan and an ignition engine. The Panther was unique for it's time with a low wing rather than the more traditional high wing cabin type model. In 1939 it was kitted by the Peerless Model Airplane Company and became known as the Peerless Panther. The BMJR Park Panther was scaled down by Harry Stewart to a wingspan of 40"  with an area of 227 sq. in. Only significant difference from the original design was to replace the under cambered airfoil with a flat bottom wing. For RC this change has produced stalls that are far more gentle with a wider speed range for more blustery conditions. It's Free Flight roots are apparent as the Park Panther has demonstrated "hands off" stability, and produces very graceful loops and rolls, but does not like to be inverted. With a flying weight around 11 oz, model has a wing loading of about 7 oz. per sq. foot for relaxed flying. Originally designed for speed 280 powere (no longer available). recommended power is the HC-2208 brushless (M-112) with 9 amp speed control (C-M-112). 2 micro servos are also required (HS-55).