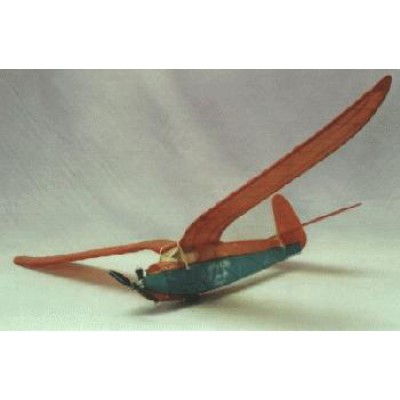 The Mystery Man was designed in 1938 by Elbert (Joe) Weathers, and a two part construction article was subsequently published in the June & July 1939 Air Trails magazine. The design dominated West Coast competition until the National Aeronautics Association (NAA) banned it from competing, due to a drop-off landing gear which Joe contended was a take-off dolly. Some 50 years later the society of Antique Modlers (SAM) ruled the Mystery Man was legal even with the take-off dolly. It is identified in the SAM approved designs list as an  Antique type, Fuselage class design.

With it’s curved gull wing it is a graceful yet complex design, which is now presented to the average model builder with laser cut and pre-bent parts. Model has  a 36" span for SAM O.T. Replica or FAC 30" for O.T. gas Electric.  The BMJR kit is an excellent choice for small electric R/C due to its’ spacious fuselage and free flight stability. Powered by an .020 gas engine the Mystery Man has proven to be truly BEAUTIFUL IN FLIGHT.  The HC-2208 30W brushless motor (M-112) with folding prop from Maxx Products is an excelent arangement.