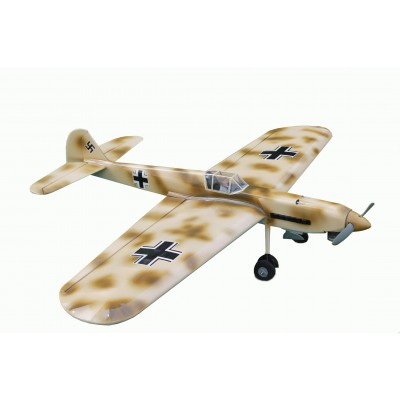 ~~Messerschmitt Bf 109, commonly called the Me 109, was one of the first truly modern fighters of the era, including such features as all-metal monocoque construction, a closed canopy, and retractable landing gear.  The Bf 109 was the most produced single seat fighter aircraft in history, with a total of 33,984 airframes produced from 1936 up to April 1945.   First flown in August 1935, it is ironic that the prototype had a 695 hp British Rolls-Royce Kestrel engine. This Simi-scale Control Line Stunt model designed by Jack Sheek, and published in the April 1970 issue of Flying Models Magazine, is a model that can be embellished with scale detail, and retain the  capability  of  flying the complete Classic and modern AMA stunt pattern with precision.  Model has a 52” span and with a Brodak 40 has a flying weight of 47 ½ oz.