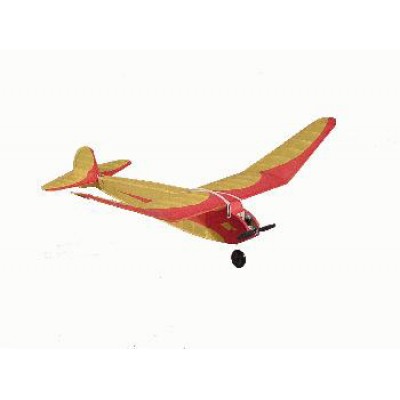 Gilbert Shurman designed the Rambler Gasoliner in 1938. It's first contest was in Philadelphia where it placed 1st with a 22 min. flight on a 19 sec. Brown Jr. engine run. The second flight was in March 1939 on Long Island where it went OOS. And after 64 years it was a Rambler that won the Old Time Gas Replica event at the 2002 Flying Aces Club, FAC, meet in Geneseo, N.Y.The Rambler was originally published in the September 1939 issue of Flying Aces magazine, and reprinted in the February 1979 issue of Flying Models. It has been reported to be, one of the best flying, easiest to build, and most user friendly of all pre-WWII model airplanes . The BMJR Rambler-30 is specifically designed to qualify for the FAC Old Time Gas Replica event. The event is for models-of-models designed before December 31, 1942. Model must have a maximum wingspan of 30" with electric or CO2 power. For gas enthusiast, the model may be flown in the Society of Antique Modelers, SAM, 02 Replica event which also has a 30"  wingspan limit, and is restricted to for .020 gas engines. BMJR Rambler 30 has a 30" span and 124 sq. in area.