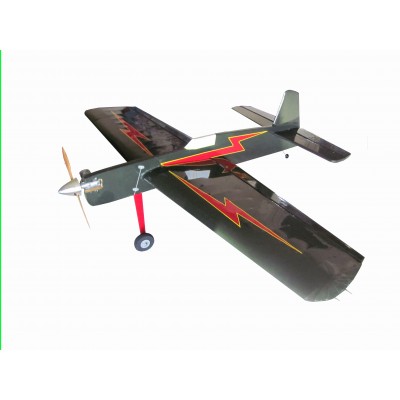 The Nobler, originally designed by George Aldrich in 1950, was introduced in the 1952 May & June issues of Model Airplane News. The Nobler was said to be designed with 3 key features in mind; smoothness performing maneuvers, appearance, and the model had to fly in all weather conditions. George took 1st at the 1952, 53, 56 & 57 Nats. The Nobler was later kitted by Top Flight (still in production) and is said to be the most winning stunt model ever designed. I my self built at least 3 in the 1960's. Returned to Control Line in 2010 (50 years had passed) but I wanted to build another Nobler. The BMJR Profile NOBLER was born when Bob Whitney mentioned he was looking for a profile model to fly in PAMPA profile stunt. The BMJR models has a 50" wingspan with 542 sq. in. of area, and the simplicity of a profile fuselage. With a Fox 35, flying weight is 37oz. and is of course capable of all control line aerobatic maneuvers. We are currently flying ours with a Brodak 40.