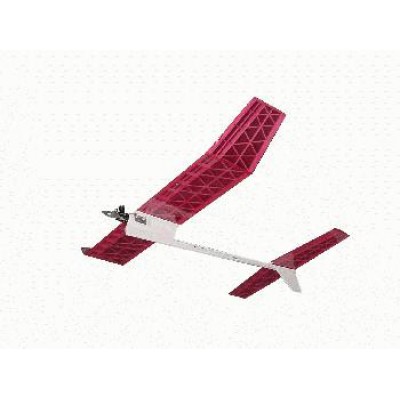 The Bounty Hunter was designed by Dick "Fast Richard"  Mathis in 1961 as a relatively large 1/2A with a 416 sq. in. wing. The original had a low-thrust line with a shallow climb angle. But after watching Russ Hansen's T-Bird the engine was moved to a high-thrust configuration producing a near vertical climb. The 416 version was published in American Modeler and produced as a kit by Model Aircraft Labs in the early 60's. For 2007 National Free Flight Society One-Design competition it was scaled by Fast Richard himself to 245 sq. in. with a span of 39 1/2" which makes it a competitive model for classic gas competition with today's shorter engine runs. The Bounty Hunter is a display of the Dick Mathis design signature: high-thrust, swept tips, pylon, inverted fin, flat center panel, angular lines, "birdcage" structure, and HLG airfoil. We flew ours with a Fox .049, Sill availabe on line. Check with Doug Martin at dougsengines@hotmail.com.