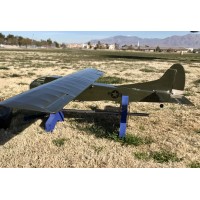 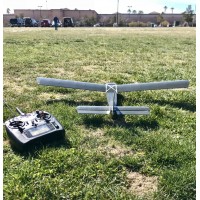 Starting with our Free Flight version BMJR modified the structure for rudder, elevator and ailerons. A 4th channel was added  for aero-tow release.

The Waco CG-4A was the most widely used American troop/cargo  glider of World War II. Designed by WACO the Weaver Aircraft Company, flight testing began in May 1942, and eventually more than 13,900 CG-4As were delivered. The CG-4A was constructed of fabric-covered wood and metal and was crewed by a pilot and copilot. It had two fixed mainwheels and a tailwheel for service and training. For battle a drop off dolly and wooden skids were used for rough field landing.  C-47s were usually used as tow aircraft. The tow line was 11⁄16-inch-diameter nylon, 350 feet long.