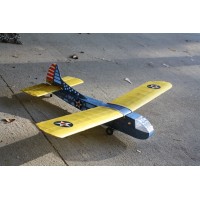 The Waco CG-4A was the most widely used American troop/cargo  glider of World War II. Designed by the Weaver  Aircraft Company,(WACO)  flight testing began in May 1942, and eventually more than 13,900 CG-4As were delivered. The CG-4A was constructed of fabric-covered wood and metal and was crewed by a pilot and co-pilot. It had two fixed main wheels and a tail wheel for service and training. For battle a drop off dolly and wooden skids were used for rough field landing.  C-47s were usually used as tow aircraft. The tow line was 11⁄16-inch-diameter nylon, 350 feet long.

Our WACO CG-4 was inspired by an article in the October 1959 issue of Model Airplane News.  (I had kept all these years) I guess waiting for FAC scale glider. The BMJR kit is scaled to .44” = 1 ft. Model has a 36” span with 157 sq. in area,  Model is intended for  FAC 36” scale glider Free Flight competition.

Our 1st kit built model is cover with polyspan and has a lite airbrush coat of olive drab Klass–Kote. Finished weight is 154 gr (5.4 oz) with LG and struts; 146 gr (5.1 oz) without. With judicial building, eliminating the LG and LG support structure, Japanese tissue and dope; I'm confident 4 1/2 oz flying weight is possible.